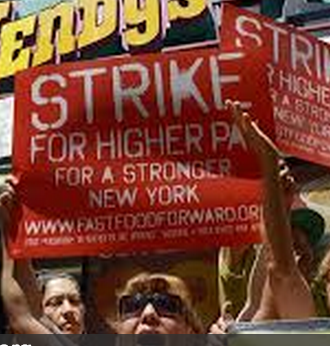 Fast food workers in New York took another big step toward winning fair wages two weeks ago when Gov. Andrew Cuomo announced the convening of a new Wage Board to examine and make recommendations about increasing the minimum wage in the state’s fast food industry.

Cuomo’s office has now announced the next steps in the Wage Board process, including plans for four public hearings in June – in Buffalo, New York City, Long Island and Albany – to take public testimony.

Alliance for a Just Society salutes the broad coalition of community and labor groups in New York. Their disciplined organizing, savvy strategizing, and major mobilizations demonstrating strength in numbers, have raised the public demand and built the grassroots momentum to make this progress possible.

Alliance affiliates Citizen Action of New York, Make the Road New York, and Restaurant Opportunities Center United of New York have all played important roles in the ongoing organizing for fair wages in the state.

They helped secure a $2.50 increase in the minimum wage for tipped workers through the Wage Board process in February, raising the tipped minimum wage to $7.50 an hour – and marking a major step forward for the One Fair Wage campaign to end subminimum wages. This victory was a big win. It has since proved doubly significant: by demonstrating the potential of the Wage Board process, it paved the way for the governor to employ that process again now.

These organizations mobilized hundreds of grassroots members to join Fight for $15 events in New York City and in cities across the state on April 15, elevating fast food workers’ demands for $15 an hour and union rights and building momentum in the ongoing push to raise wages.

They coordinated legislative strategies in Albany to pass a strong minimum wage bill (phasing up to $15 an hour in New York City and its suburbs, and $12.60 an hour statewide) through the State Assembly on May 4. These moves raise the stakes for the governor to take executive action on wages in light of the legislative gridlock in the State Senate.

As the new Wage Board convenes and as the coalition partners in New York organize to ensure that grassroots voices calling for a $15 wage are heard at every public hearing across the state, the Alliance’s research on what constitutes a living wage in New York provides an important benchmark for the Board’s investigation.

Under New York State law, a Wage Board can recommend changes to the minimum wage in a specific industry if it finds that wages are insufficient to provide for the life and health of workers. Based on the Job Gap living wage research, that’s clearly the case with fast food wages in New York today. Looking at what it actually costs to make ends meet in New York, this much is clear: the time for a $15 wage floor is now.

The new Wage Board can make $15 an hour a reality for New York’s fast food workers. The coalition of partners in New York is gearing up to mobilize for the raise fast food workers need, pushing toward another big victory on fair wages.

But we know the fast food Wage Board won’t be the end of the fight for fair wages in New York. Instead, for organizers and grassroots leaders in communities across the state it’s the next landmark on the road to winning an increase in the minimum wage for all workers in New York.

LeeAnn Hall is the executive director of Alliance for a Just Society, a national organizing network with affiliates in 20 states.