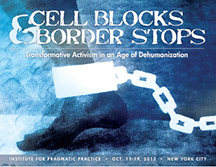 The Institute for Pragmatic Practice, Union Theological Seminary and the Alliance for a Just Society are hosting our fifth symposium,

Cell Blocks & Border Stops. Hundreds of organizers, academics, policy leaders, journalists, theologians and grassroots activists will convene and examine the intersection of immigration control and mass incarceration, and to consider the future of activism and organizing in these areas.

Today, more than seven million people are under control of the criminal justice system (prison, probation, parole or detention) exceeding the combined populations of Brooklyn, Queens, Manhattan, and Staten Island.

Eleven million immigrants-roughly the population of Ohio-are out of compliance with federal immigration law, and at constant risk for harassment, detention, and deportation.

Counting friends, families, colleagues, and neighbors, tens of millions of people today are directly affected by the sprawling immigrant control and criminal justice systems. Poor Black and Brown people have been born this burden most heavily, driven by long-standing beliefs in racial inferiority and white supremacy.

But these systems leave few untouched.

Join us and noted scholars and activists Cornel West and Pramila Jayapal among many other noted speakers to end the dehumanization of millions of mothers, fathers, sons and daughters by law enforcement and the criminal justice system.