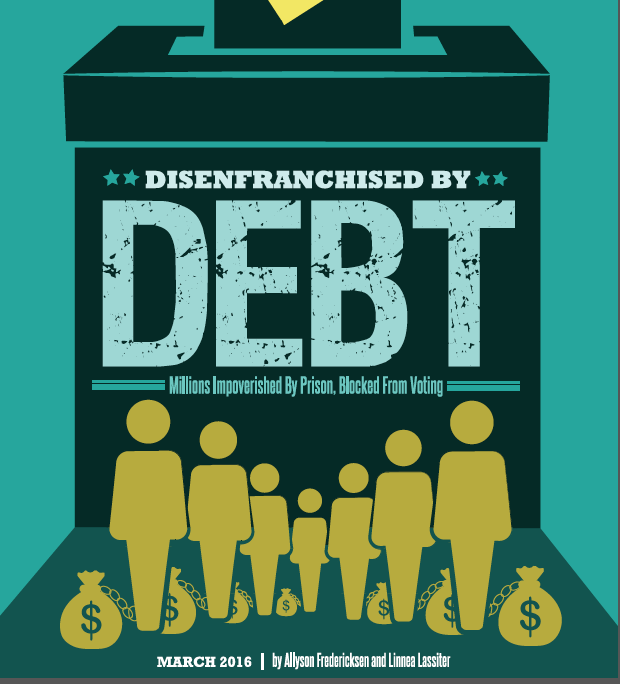 This opinion piece by Libero Della Piana was written for OtherWords and appeared in Truthout.

At 36, Marcus White has spent half of his life in prison. Today he’s no longer behind bars, but now he’s imprisoned by something else: debt.

When White was sentenced, he was saddled with $5,800 in criminal fines and fees. By the time he was released, he was stunned to learn that with interest, his debt had grown to $15,000 — and continues to grow even now.

That debt isn’t just a drag on White’s finances. It’s a drag on his right to vote.

White’s not alone. More than 50 years after the 24th Amendment made poll taxes unconstitutional in the United States, formerly incarcerated people in at least 30 states are still barred from voting because they’re unable to fully pay their court-related fines and fees.

“I have completely changed my life and have been given a fresh start,” White said recently at a conference in Washington D.C. “Voting wasn’t important to me before, but now I want to be a productive citizen in every way… I want a voice in the process.”

“I am accountable for everything I have done,” he said. “But the interest rate on my fines is crazy.”

New research by my organization, the Alliance for a Just Society, shows that millions of people — including an estimated 1.5 million African Americans — are blocked from voting because they can’t afford their criminal debt.

That debt starts at sentencing and can grow at interest rates of 12 percent or more while inmates serve their sentences. It continues to grow after they’re released and face the numerous barriers to finding work and housing.

Some states explicitly require that all court-imposed fees are paid before voting rights are restored. Others are more indirect, requiring the completion of probation or parole — with the payment of fees and fines a condition of completing parole. The laws vary, but the effects are the same.

On the other hand, former offenders with wealthier family or friends, or a savings account, are able to quickly regain their voting rights. The result is a two-tiered system that restores voting rights to an affluent elite and leaves the rest — the majority, in fact — without a vote.

The reality of racism in the United States and the criminalization of poverty means that black people and other people of color are more likely to be arrested, convicted, and locked up for longer than whites. Blacks are also less likely to regain their right to vote once they’re released.

That racial disparity bears a grim resemblance to the poll taxes imposed throughout the South after the Civil War, which were intended to keep newly freed black people from exercising their civil rights.

The problem has worsened since 2013, when the Supreme Court gutted the Voting Rights Act of 1965. Many states — including several in the old Confederacy — have since rushed to impose restrictive voter ID laws and other impediments to voting. But debt as a barrier to voting remains a little-known reality.

The clearest solution is to automatically restore voting rights to formerly incarcerated people, and to register everyone immediately after they complete their sentence. Alternately, lawmakers could repeal all criminal disenfranchisement. Short of that, states should simply remove the payment of court debts as a condition for voting.

Many of us take voting for granted, especially in a presidential election year.

Voting means having a say in the policies that affect your life and community. It’s an opportunity to elect those who will represent your values. Voting is actively participating in a better future.

Voting is hope. And the ability to pay should never be a requirement for that.

Libero Della Piana, leads racial justice and criminalization initiatives for the Alliance for a Just Society, where he is the digital director. AllianceForAJustSociety.org
Distributed by OtherWords.org