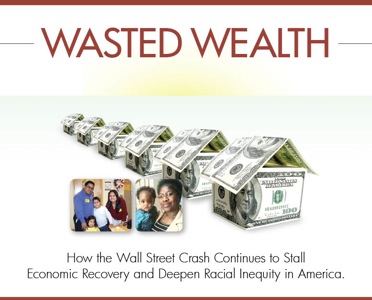 13 million homes are still underwater nationwide. The nation is at risk of seeing an additional erosion of $221 billion in wealth. Writing down the principal on mortgages to current market values would save homeowners thousands of dollars a year. It would also boost the economy and create jobs.

These findings were released today in “Wasted Wealth: How the Wall Street Crash Continues to Stall Economic Recovery and Deepen Racial Inequity in America,” a national report authored by the Alliance for a Just Society. For homeowners of color, who tend to keep their wealth invested in their homes and communities the impact of the foreclosure crisis is profound.

The report further details the effects of foreclosures and the pipeline of underwater mortgages on 17 cities throughout the nation. Working with partners Home Defenders League and the New Bottom Line, the Alliance released the report this morning. It includes stories from homeowners in each of these cities; many are members of the Home Defenders League and are actively fighting to remain in their homes.

This study is eye opening and puts a halt to the narrative that the housing crisis is over. It is clearly not. What we need now is the leadership in Washington D.C. to save homeowners and reset the nation’s economy.

Key Findings in the Report:

We have created a website for the report along with our partners the New Bottom Line and Home Defenders League. Read the full report: wastedwealthreport.com/download

We would like to thank the many contributors to the report: