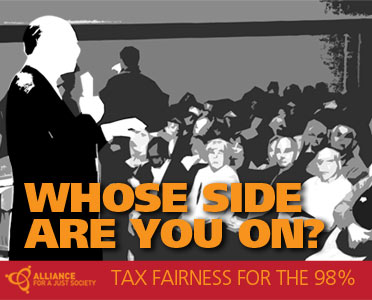 As members of Congress arrive home for their August recess, which starts this week, some of them have a lot of explaining to do about their recent votes on the Bush tax cuts. In particular, every senator and representative who stood in the way of ending special tax cuts for the richest 2 percent of Americans and restoring some much-needed fairness to the tax code owes his or her constituents an explanation.

In case you’ve been watching a channel other than C-SPAN for the past two weeks (Olympic fever, anyone?), here’s the quick recap of the latest developments in Congress:

On July 25, the Senate voted 51-48 to pass a bill that would end extra breaks for the top 2 percent, on incomes above $250,000 (see roll call here). Then, last week, the House rejected a similar proposal (see roll call here) and instead opted to pass a bill extending all of the Bush tax cuts, including extra breaks for the top 2 percent, while also raising taxes on 25 million mostly middle- and lower-income working families by an average of $1,000.

Translation into Olympic speak: the Senate stuck the landing; the House did not.

For the 48 senators and 257 representatives who voted to protect extra tax cuts for the top 2 percent, there’s one serious problem with justifying their vote: it’s pretty unjustifiable. It fails on fairness. It fails on responsibility. It even fails on basic economics.

How about fiscal responsibility? Extending the special breaks for the wealthy would cost the country $68 billion in 2013 alone, and an estimated $1 trillion over the next 10 years. At a time when we sorely need revenues to rebuild our crumbling roads and bridges, stop laying off teachers and first responders, and reinvest in local communities and local economies, this is a huge sum of money that we simply can’t afford to squander on another giveaway to the top. It’s not the responsible thing to do.

Defenders of the extra tax cuts for the top 2 percent repeat over and over a line about protecting small business job creators from a tax hike. But just repeating something again and again doesn’t make it any more true. The truth is, less than 3 percent of small business owners take home more than $250,000 a year, according to a recent Treasury Department report (page 21). And, as the Center on Budget and Policy Priorities points out, defenders of the top bracket tax cuts like to use a definition of “small business” that includes hedge fund managers, real estate partnerships, and large lobbying firms. That’s like putting small business on steroids. Doping is against the rules in the Olympics. It should be against the rules in Congress, too.

Where do things go from here? The opposing votes in the Senate and House set up a showdown between the two chambers, one that probably won’t play out until Congress’s lame-duck session after the November elections. But what happens then will be heavily influenced by what happens during this August recess — right now. And that’s why now is the time for constituents in communities all across America to demand explanations from every member of Congress who voted to protect special tax cuts for the top 2 percent. It’s time to ask them: “Whose side are you on — the side of our communities and local economies, or the side of Wall Street, K Street, and the richest 2 percent?”