The Hidden Costs of Unaffordable Education 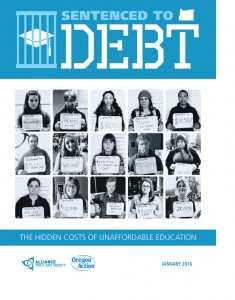 For this generation of students, a college education is becoming significantly more expensive. This trend, observable both in Oregon and across the country, makes college unaffordable to many, forcing students to turn to student loans as a necessary part of funding their education. In Oregon, students borrowed more than $1.34 billion for the 2013-2014 school year, twice as much as they borrowed a decade before.

This trend comes as legislators reduce funding for higher education, leaving Oregon far behind other states. Oregon’s funding cuts since the beginning of the Great Recession amount to the fourth highest in the nation. Meanwhile, Oregon is last in the U.S. in higher education spending, with 3.4 percent of its budget funding colleges and universities as of 2013.

These funding cuts shift the cost of attending college from the state to the students, funding a public good mostly through tuition. This privatized model is the primary driver of Oregon’s student debt crisis.

Entering young adulthood with student debt has a significant impact on the financial and health outcomes for students. Those with debt find it more difficult to purchase a home, save for retirement or start a small business. With debt, many experience high levels of stress or anxiety. Debt without the means to repay it ranks fifth on a list of most stressful life events.

A 2015 survey of southern Oregon students finds students struggling to pay for housing, food, utilities and childcare. Respondents overwhelmingly say they need debt to fund their education. And respondents resoundingly state that policymakers are not doing enough to address the debt crisis.

Among the key findings:

Based on these findings, we recommend significant and systemic changes in Oregon’s higher education model. We recommend that the Legislature: