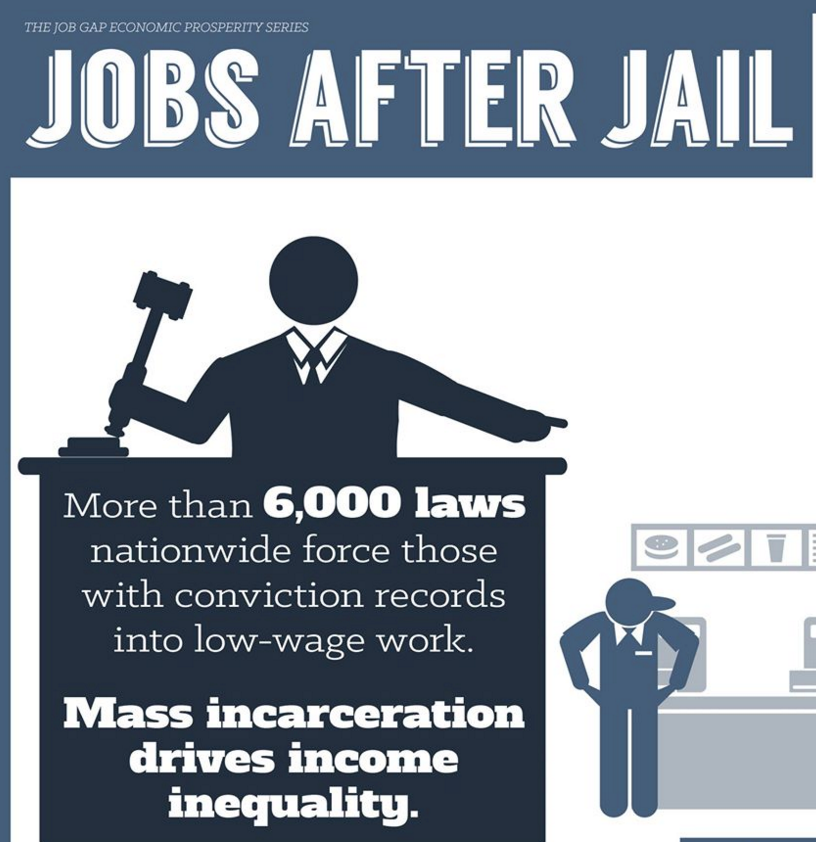 A prison sentence often doesn’t end on the day of release. For many people with conviction records, their sentence will continue for years to come with barriers to employment and housing.

Research in the report, “Jobs after Jail: Ending the prison to poverty pipeline,” by the Alliance for a Just Society, show that states have an average of 123 mandatory bans and restrictions preventing people with felony convictions from employment in certain occupations or from obtaining certain occupational or business licenses.

In Washington state alone, there are more than 90 career paths that are unavailable to someone who has a criminal record. Imagine having completed your sentence and being released into a community where you can’t be hired as a laborer, or work in transportation, business, education, social services, cosmetology, land development, public safety, or health care. For millions of people across the country, a past mistake can be a sentence to a lifetime of poverty.

According to the National Employment Law Center, “A 2011 study of the formerly incarcerated found that employment was the single most important influence on decreasing recidivism.” Other research shows that between 60 and 75 percent of people with a conviction record are jobless one year after release.

Beyond recidivism, though, finding work helps keep those with conviction records out of poverty. The Center for American Progress notes that a 2013 study found that that nation’s poverty rate would have been down 20 percent between 1980 and 2004 “if not for mass incarceration and the subsequent criminal records that haunt people for years after they have paid their debt to society.”

Recommendations in “Jobs after Jail” show that there are a variety of tools that can be used to ensure that a conviction record does not lead to a lifetime of poverty, including “Banning the Box” on employment applications, re-evaluating laws restricting employment in specific occupations, and making those with conviction records eligible for safety net services.

Additionally, a Certificate of Rehabilitation can help potential employers, licensing agencies, or even landlords assess the suitability, safety, and welfare of an applicant or renter. These certificates “can offer a presumption of rehabilitation … or at minimum an individual’s commitment to rehabilitation,” helping eliminate personal discrimination and providing additional evidence of rehabilitation and desire to reintegrate into the community.

So far, six states: Arizona, California, Illinois, Nevada, New Jersey, and New York use some form of these certificates, and Washington State is one of the latest states to propose adoption of a similar system.

Washington’s proposed law is unique in that it prohibits the denial of occupational licenses based solely on a conviction record, but still allows employers and housing providers the discretion to assess individuals for hire or rent and select the individual of their choice.